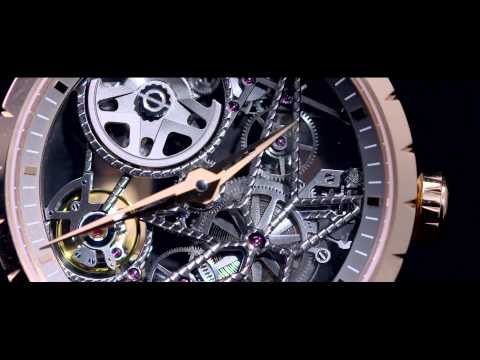 http://www.rogerdubuis.com/The 25th edition of the Salon International de la Haute Horlogerie provided a brand-new opportunity for Roger Dubuis to affirm its acknowledged status as the specialist of architectural and technical mechanics.It did so in particularly spectacular style with an array of Excalibur models showcasing its signature role as the pioneer of contemporary skeleton calibres, while taking this savoir-faire to the next level with an entirely skeletonised Excalibur Spider collection, an all-new automatic skeleton model, as well as the mysterious and intriguing Excalibur Brocéliande ladies’ trilogy.These creations were staged to dramatic effect in a purpose-designed setting that highlighted the unique Roger Dubuis Astral Skeleton concept governing this entire ‘Year of the Astral Skeleton’, as well as in a series of three Astral Dinners punctuating the first three evenings of the SIHH.